Batten Down the Hatches, Mates!!

This just in from the BBC:
"A "mild tsunami" along the South West coast was probably caused by an underwater landslide, a coastal expert has said.

There were reports of rivers changing direction, fish leaping out of water and hair standing on end due to static.

Dr Mark Davidson, from the University of Plymouth, said the surge was quite a "rare" occurrence.

The first reports of the event came from St Michael's Mount in Cornwall.

Boatman Dave Ladner said: "The funniest thing was on the causeway all the ladies' hair was standing on end with the static.

“...it was pouring over the causeway like a torrent”

"The sea on the eastern side was probably 8ins (20cm) to a 1ft (0.3m) higher than the rest and it was pouring over the causeway like a torrent rather than just a gentle meeting in the middle."

Roland Stewart from Millbrook, near Plymouth, said: "It was quite violent in a way, my dinghy was moving around with the movement of the water and I just wondered what the hell was going on.... within 15 minutes it was all over."

Amateur video footage shot on the Yealm estuary, to the east of Plymouth, shows the surge.

Bob Brown was launching his dinghy at the mouth of estuary at 1015 BST, an hour after low tide when he saw the wave.

"It came back at quite a force, all the boats were bobbing around. 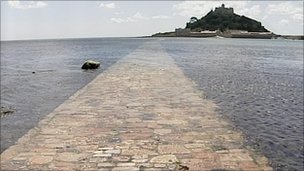 "To see a tide suddenly stop and go back the other way at four times the speed was unbelievable."

He said a local landowner told him the first thing he noticed was "lots and lots of fish jumping out of the water".

Dr Davidson, an associate professor in coastal processes, told BBC Spotlight: "[Surges] are quite rare and it's probably not a tidal phenomenon.

"It's probably more likely to be a tsunami of some kind, obviously it's quite mild."